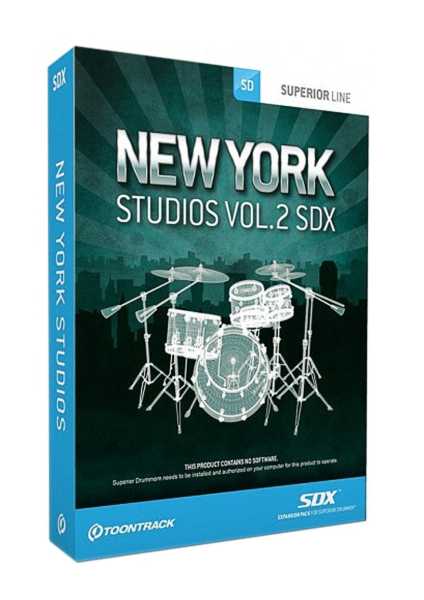 The New York Studios Vol.2 SDX was recorded by engineers Neil Dorfsman and Pat Thrall together with drummer Nir Z. It contains unique drums sampled in two of the most heralded drum rooms and notable New York studios ever: the Allaire Studiosand The Hit Factory.These two landmark facilities have hosted the who’s who of popular music for decades – anything from David Bowie to Stevie Wonder, Michael Jackson, The Rolling Stones and Paul Simon. Since the recording of these sound libraries however, both studios have tragically closed their doors to the public and thus, the legacy of their signature sound lives through their respective body of work, but now also vicariously through these very drum recordings.

The New York Studios Vol.2 SDX is divided in two separate libraries, one for each studio. In total, it comes with 13 snare drums, seven sets of toms, seven kicks and a wide assortment of different cymbals – all sampled in extreme detail and showcasing the incredible sonic qualities of these two rooms.The room at Allaire Studios was ambient, reverberant and almost church-like in its construction. The dense wooden walls and ceiling produce a warm and natural reverb that give the drums a clear character without being too loud or taking over. The room at The Hit Factory also had a large, wooden and meticulously crafted room, producing a very rich and characteristic natural reverb.