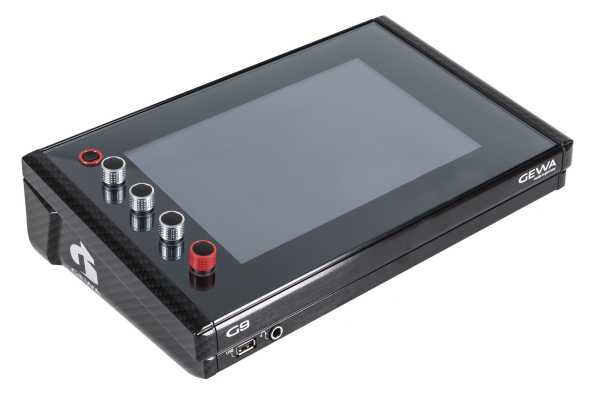 This module knows no limits and surpasses all boundaries. GEWA leveraged an international team of drummers and drum specialists, sound technicians, electronic engineers, hard- and software engineers, programmers and designers to create a groundbreaking instrument that invents its own new category.

This workstation will integrate into any audio- and recording environment and even features on-board signal processing. But the best part? You can intuitively use it thanks to the interactive 10" touch interface.

A new way to interact with your drums!
The 10" Direct Touch Interface makes the G9 easy to use. Creating your own presets, adjusting your trigger settings and even routing your drums to different channels is done in a snap.

Multi-Chain Architecture
GEWA has developed a special multi-chip architecture to ensure that the extensive touch interface, trigger recognition and high-resolution samples for carefree playing are loaded as quickly as possible. The advantage of this is that each chip has its own task and is specialised in doing this in the best possible way.

Pro-Audio Recording Tools
What is the interface you can record the G9 with? The answer is: YES! The G9 offers almost infinite possibilities to record your drumming. This is one of the main reasons why the G9 is called "Workstation" by GEWA. Either you use the two Master Outputs, the eight Direct Out channels, or you simply connect the G9 directly to your PC or Mac via USB. The G9 can easily be used as a plug'n'play interface with eight channels - including MIDI functionality!

3D Sonic Image
Are you tired of bad ambient sounds for your e-drum? Do you want the same ambient sound of the acoustic set for your e-set? And all this without having to fight your way through numerous controls? The G9 can give you just that. For the workstation not only the drum sounds but also the ambient sounds of the drums were sampled in the famous Funkhaus Studios in Berlin. This makes it easy to add natural room sounds with a fader.

GEWA Electronics Cloud - Welcome to the wireless world!
For more than a decade we have been accustomed to living in a wireless environment. In everyday life, you can transfer the latest apps and music online to smartphones, laptops or other Wi-Fi devices in seconds. The G9 takes this approach and introduces it to the world of digital drums. Built-in connectivity gives you direct access to GEWA Electronics Cloud, where you can download sounds to expand your G9 library.

Wide compatibility
The GEWA G9 module is compatible with most electronic drum pads on the market. You can simply select existing trigger presets or create your own presets!